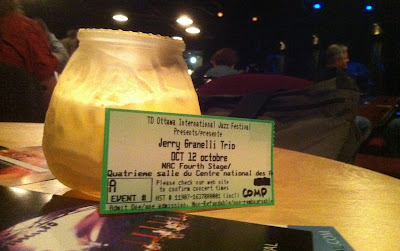 As anyone who closely monitors my tweeting habits can attest, I’ve developed a new disconnect among my peers: I like jazz. A few hesitant experiments have flourished into a full tower of CDs and records spanning the genre’s canon. From 1950s hard-bop and 70s avant-garde to modern day ambient-jazz creators, I’ve been warming to a series of scenes that percussionist Jerry Granelli has lived to tell the tale of.

So a round of firsts, then: my premiere jazz concert, the first time stepping inside the clean confines of the National Arts Centre, and my first attempt at reviewing live, often freeform jazz. Naturally, this called for a round of seconds as well, in terms of pints my friend Shane and I had before crossing the street to the NAC. And as an evening rain began misting over downtown’s lit-up buildings, the time felt right for some jazz. 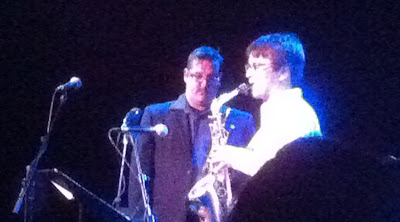 After finding seats among the casually arranged tables and chairs of the NAC’s fourth stage, we greeted the Craig Pedersen Quartet to the step-up stage. Opening for Granelli and a well-known local act around Ottawa, Pedersen and his crew delved into a selection of tracks hot from their forthcoming album. ‘Little Bird’ roused the dimly lit room with deep drum-fills and a synchronized attack of trumpet and sax, while bass and drum duties stirred up a late-night, urban vibe which neatly emboldened the horns. Over the following tracks – of which ‘Early Winter’, with its suffocated trumpet solo, was a highlight – the Craig Pedersen Quartet showed great syncopation, working tightly controlled arrangements but opening generous pockets for improvisation. What made their whole set so engaging was that each member brought something significant to the table; the percussion (by Mike Essoudry) was dexterous, the bass (by Joel Kerr) restless, and the two horns (Linsey Wellman on sax, Pedersen on trumpet) continually upped the ante when soloing. 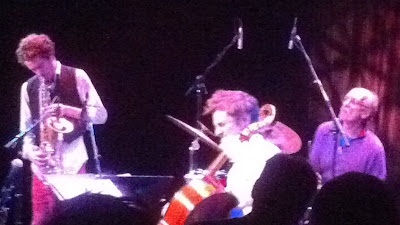 After such a brisk and upbeat set, the Jerry Granelli Trio took to the stage. Famous for his involvement in many classic ensembles but foremost for playing in Vince Guaraldi Trio’s 1965 classic A Charlie Brown Christmas, Granelli’s style has been described as unclassifiable despite a life spent in jazz. And for good reason: warning us in advance that his selections wouldn’t sound as they do on record, Granelli and his two sidekicks (Simon Fisk on bass and cello, Danny Oore on saxophone) began reinterpreting tracks from their 2011 record Let Go with patient atmosphere. Neighbouring tracks ‘Under a Chinese Saloon’ and ‘A Chinese Saloon’ began with tuneless saxophone gasps, blowing like a dead breeze over Granelli’s freeform drum taps. While the mood was provided as much by Fisk and Oore as it was from a generous amount of negative space, Granelli’s momentum brought the procession into order with his ability to evoke a thousand different tones from striking the cymbals in certain ways.

Continuing on with an expanded rendition of ‘Bones’, the trio seemed at home, chuckling to each other in the midst of any unexpected improvisations. Their playful taunting hinted at the sense of brotherhood between Granelli and his much younger bandmates, with the percussionist even joking at one point that the story of how the three met was simple: he was “waiting for them to be born”. And if perhaps they grew too comfortable at times, slipping out of the groove and experimenting in near silence for stretches of time, the trio rebounded nicely with the cello, alto sax and drum surge of ‘If I Were a Clown’. Between that unreleased composition and the subsequent number entitled ‘Dance’, Granelli and Co. grew increasingly tight, offering a more direct and upbeat strategy that nonetheless contained asides of silliness (as when Oore riffed off of Fisk’s cello by squealing his stool along the floor). 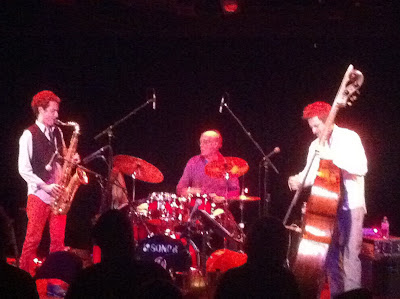 While sidestepping a table in an attempt to snap a photo of the band in action, I encountered a woman interpretively dancing to the trio’s score - throwing her arms out and pivoting in close quarters, with no one seemingly noticing. Good thing, because no dance technique could predict or keep up with this performance. Frequently disjointed but always creative, the Jerry Granelli Trio perused swinging tempos as well as experimental retreats. Seeing a veteran of such prolific (and historic) musicality create on the spot kept the audience acutely aware of each progression, whether fulfilled or merely teased. And when Shane and I departed the venue into the wet streets, we felt assured we’d seen a rare show indeed.

The Jerry Granelli Trio tour continues West until the end of October, with stops in Edmonton, Vancouver and Seattle. Tour details can be found here. Don’t miss it.
Posted by SCQ at 2:22 PM