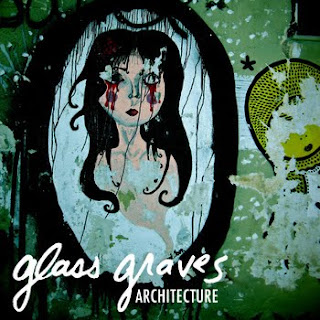 What’s harder to believe: that nobody had thought up a moniker as awesome as Glass Graves before now, or that the sound of its debut has garnered the term “witch-house” as a means of classification? Sigh. Works like Architecture, a heavy swirl of dreamy vocals and decaying arrangements, discredit any attempts at labeling – whether made-up or established – for no better reason than that these records exist on the periphery of what is recognizable and intangible. Like a cloudy wine, Glass Graves (aka Gaby Graves) create unsettled compositions that feel dangerous because they’re intoxicating, or maybe vice versa.

To the credit of “witch-house” believers everywhere, Architecture indeed sounds haunted, even without knowing that Graves recorded the debut in a derelict farmhouse during a week-long snowstorm. Although her vocals call to mind the exiled-angel figureheads of early 4AD (This Mortal Coil, Cocteau Twins), her compositions dig through muddy crypts with desperation too visceral for starry-eyed wandering. ‘Sister Dream’ creeps out its tender ambience while a spritely piano behind ‘Lila Tov’ could’ve brightened the record’s second-half had the razor-sharp guitar underneath not been menacing the whole time. There’s no questioning, though, how Graves’ guitar makes Architecture the head-turning success it is; what would ‘Corrine’ have been without that distorted crest? How would ‘Glass Lips’ have countered those gorgeous vocals without some six-string growl on the low-end?

The combination, her speaker-blown vocals interacting with blunted lo-fi arrangements, occasionally creates the aural illusion that you’re hearing each half of a song being executed in different rooms, one slightly closer than the other. Her beautiful, anxiety-free take on Atlas Sound’s ‘Quarantined’ attests to this alluring disconnect, as the song’s familiar hook lies buried under sparse beds of shimmering bleeps. As a cover, it also fits eerily well to her self-recorded songs of isolation. Haunted farmhouse or not, these diligent techniques give Architecture a powerful aura, making it all the more captivating.
Posted by SCQ at 1:11 PM