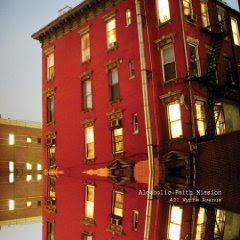 ‘We All Have Our Shortcomings’, the single of sorts from Copenhagen’s Alcoholic Faith Mission, struck a deep chord in me; one that has scarred over and been re-opened a million times since I bought my first 7” single in the third grade. Thorben Seiero Jensen’s pained vocals layered hauntingly over a lilting acoustic coda have barely settled the emotional barometer before the five-piece begin amping up the rhythm section, and what spills perfectly out of this tense build-up is that conservative yet fresh-faced indie-ballad that references Snow Patrol as easily as it does Arcade Fire. Which is to say that few bands are so capable of indie-crossover stardom yet as equally undercover as Paper Garden Records' Alcoholic Faith Mission are right now. Expect that to change within the next few minutes…

As great an introduction to the band as ‘We All Have Our Shortcomings’ is, that potential hit is but a wave in the repressed, overcast ocean that is 421 Wythe Avenue. Lyrically tumultuous but showcased with an emboldened bravado, this sophomore drifts rather nonchalantly between serene instrumentals (‘Someone Else’) and stomping heartbreak anthems (‘Painting Animals in Watercolors’), multitracked and ghostly girl/boy harmonies (‘Escapism’) and cathartic seething (‘Sweet Evelyn’). The job of integrating so much variety thankfully doesn’t fall squarely in the lap of the producer, although the production is fantastic, carrying tinges of morning-ambience and an electronic edge that renders every note and vocal pitch-perfect. What really umbrellas these songs of oozing sentiment is Alcoholic Faith Mission’s command of songwriting, which not only disregards the go-to rules on introspective, woe-is-me composing, but in the stitches of this song-cycle pinpoints a true nostalgia for 421 Wythe Avenue. Be it an old house you passed every day for a year or an apartment that witnessed the exhausting details of your formative years, 421 Wythe Avenue builds from the foundation up (through the rites of yearning on ‘Escapism’) and establishes fine minutiae like twenty-something disaffectedness (‘Gently’) and urban proximity (the late-night jazz moaning in ‘Time’). Am I getting carried away? Perhaps… but getting to know an album of such introspection entails certain gap-filling, and for my imagination’s worth, no sonic frill is wasted.

Seemingly complicated but uncluttered, 421 Wythe Avenue is a worthy colleague to the work of Broken Social Scene; both emit emotional indie-rock that feels breezy and uncalculated yet Alcoholic Faith Mission aren’t afraid to occasionally fall off the proverbial cliff. Nothing about ‘Sweet Evelyn’, an eleven-minute rumination of repeated acoustic chords and chiming ambiance, should’ve been a good idea. Placed just before the album’s finale and barely evolving throughout its epic running-time, ‘Sweet Evelyn’ somehow earns its indulgences and trumps half the familiar rock build-ups you’ve learned to tolerate throughout life. Alcoholic Faith Mission won’t revolutionize or champion a genre this crowded but, with 421 Wythe Avenue, they’ve certainly landed a promising square on the indie-chessboard.
Posted by SCQ at 9:44 AM

Thanks a lot Thomas.

Alcoholic Faith Mission apparently have another record coming out this year, so keep watch for that!