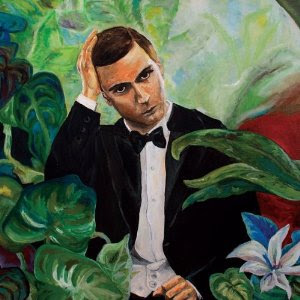 Having closed out 2010 with a compilation celebrating their tenth anniversary as a pioneering post-rock/home-listening electronica label, n5MD appeared ready to jump into 2011 with their mission statement renewed. That compilation’s focus – having new signees remix old blood – plus tagging newcomer Winterlight as a member of n5MD’s “new class”, meaning artists who were directly influenced by said label’s roster, illustrated more interest in recycling established trademarks than branching outwards and, by all accounts, 2011 looked to follow the same muse n5MD has been lusting after all along.

Then, in one unassuming release, all that fans have come to expect from the Oakland, California-based imprint turns sideways with Tobias Lilja’s Delirium Portraits. (Truth be told, I missed Lilja’s 2007 record Time Is On My Side so perhaps the groundbreaking nature of this follow-up stems from that ignorance.) Call him what you will – a less brooding Matthew Dear springs to mind – but Lilja’s devious mix of house and sprawling songwriting has put n5MD back on the progressive map. Nevermind the sheer size of Delirium Portraits – after all, it’s rare to find an n5MD release clocking well below the hour-mark – but it’s hard not to marvel at how Lilja fills that space with slow-moving verses and tight rhythms that somehow never eclipse each another. ‘Spineless’ and ‘North’ open the disc on a spritely course, all rich house beats and sorrowful vocals, but Lilja’s sinister edge increasingly punctures the brisk drive of these tempos. The piano-based ‘Love Song’ takes us crawling through Lilja’s dark side, introducing a sneaky beat in its final minute, and by the time ‘No Death Star’ breaks into its elastic-snapping synth chorus, his desperation has become Delirium Portraits’ prime motivator. Still, the likes of ‘Birthday Cake’ and ‘These Bells’ peer out from these bleak shadows with enough muscle on its beats to entice the darkness in us all.

Granted, you need to be in a particular frame of mind to find all of Delirium Portraits’ long shadows engaging. That situational dilemma marks a clear distinction between this record and the enveloping, reflective nature of your average n5MD release. But its risks, for both artist and label, translate as an artistic success in this case, launching into sonic and lyrical directions that in the world of home-listening electronica are rarely so unique.
Posted by SCQ at 6:18 PM