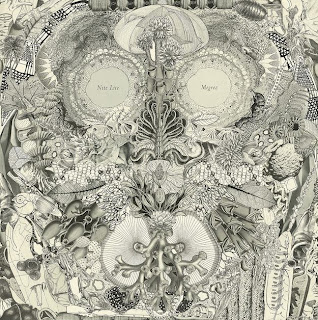 First impressions are completely disposable when it comes to found-sound records, and Megrez is no exception. Given some dedication, what initially plays like a slapdash assortment of whirls, bird-chirps and chimes will unfurl spaciously into a sweltering landscape, alien but peaceful. In the case of many good found-sound experiments, their isolated fragments mimic the working gears of songcraft until they’re virtually indistinguishable – like pop music assembled via instruments that nobody has heard before. But Nite Lite aren’t looking for inscrutable hooks; the duo of Philip and Myste French has instead taken upon nature as the forefront of organic textures, not unlike Brian Eno did for On Land.

All manner of birds and animals can be heard on Megrez, merely suggesting a place that Nite Lite calls into focus with cerebral interplays of rhythm and texture. The results envelop listeners into a world fraught with eerie familiarity (the warming kettle and livestock calling “The Axis Of Tao”) and serene disorder (the frogs and rain-drop percussion that marks “Fire Walkers”). This is music for turning off, for remedying daily routines with an exotic alternate universe. And in that respect, Megrez works wonders as ambience that spills from your 'alternate' open window – your stereo speakers.